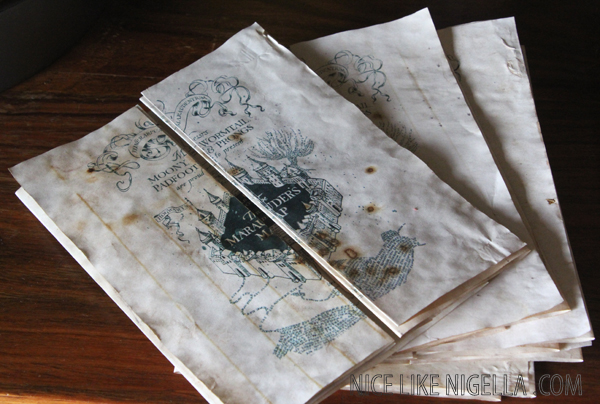 I’m such a little kid at heart. I throw a Halloween party every year. Halloween has always been one of my favourite holidays and once it’s over you’re properly into the run-up for Christmas, so it’s a nice way to mark the very end of the summer.

This year I’m very excited: we’re having a Harry Potter themed party. All the guests have been assigned with a character so that we don’t get duplicates (adults being  the adult characters and the kids getting to be the children) and I can’t wait! I’ve already made the invitations (above) as versions of Harry’s Marauder’s Map and I’ll do a separate post showing exactly how I did those probably on Monday…

Our Halloween party is always the very last barbecue of the year, whatever the weather. The men all get out in the garden there in their oh-so-flamable fancy dress costumes pouring lighter fluid on the coals and cooking by torchlight (I love a bit of danger).

This makes the food for the Harry Potter party much easier, everyone loves chicken, burgers or sausages, so I’m not going to worry about making that Harry Potter-fied, and it does mean I can go to town with the puddings.

After pouring over the Harry Potter books, and doing some research on the internet these are some of the things I fancy trying:

What do you think? Do you have any other suggestions? I though about making Cockroach Clusters, but I’m not sure how I’d do these yet… Any suggestions would be gratefully received!

I love these ideas for party decorations. I’ll have to get collecting jam jars! 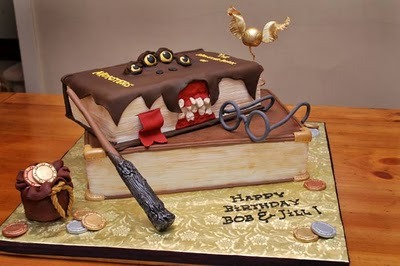 Isn’t this cake amazing! There’s no way I’m going to be making one of these, but I thought I’d share anyway!

My Other Harry Potter Party posts: